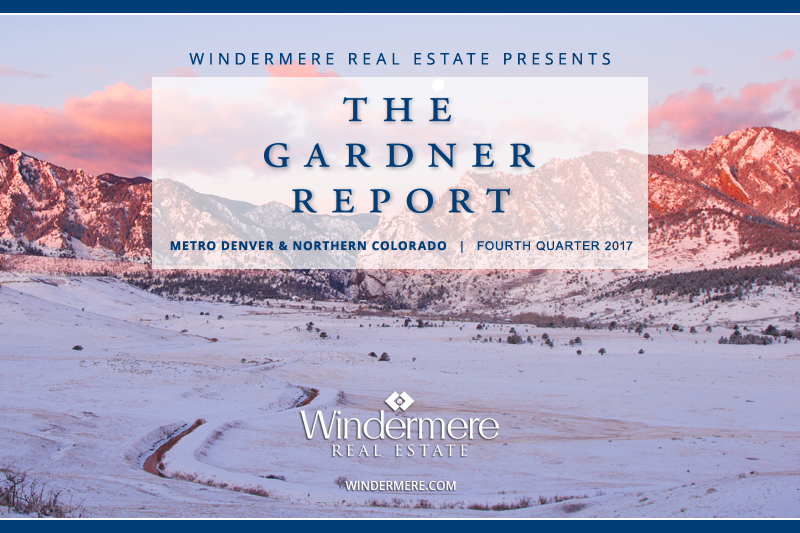 This analysis of the Metro Denver and Northern Colorado real estate markets is provided by Windermere Real Estate Chief Economist Matthew Gardner. We hope that this information may assist you with making better-informed real estate decisions. For further information about the housing market in your area, please don’t hesitate to contact us.

Colorado added 45,300 non-agricultural jobs over the past 12 months, a growth rate of 1.7%. Although that is a respectable number, employment growth has been trending lower in 2017 as the state reaches full employment. Within the metropolitan market areas included in this report, there was annual employment growth in all areas other than Grand Junction, where employment was modestly lower. There was solid growth in Greeley and Fort Collins, where annual job growth was measured at 4% and 2.7%, respectively.

In November, the unemployment rate in the state was a remarkably low 2.9%, down from 3% a year ago. The lowest reported unemployment rates were seen in Fort Collins and Boulder, where only 2.5% of the labor force was actively looking for work. The highest unemployment rate (3.7%) was in Grand Junction.

The state economy has been performing very well, which is why the wage growth over the past year has averaged a very solid 3.3%. I expect the labor market to remain tight and this will lead to wages rising at above-average rates through 2018.

For the fourth quarter of 2017, I have chosen to leave the needle where it was in the previous quarter. Listings remain scarce, but this did not deter buyers who are still active in the market. As much as I want to see more balance between supply and demand, I believe the market will remain supply-constrained as we move toward the spring, which will continue to heavily favor sellers.

Matthew Gardner is the Chief Economist for Windermere Real Estate, specializing in residential market analysis, commercial/industrial market analysis, financial analysis, and land use and regional economics. He is the former Principal of Gardner Economics, and has more than 30 years of professional experience both in the U.S. and U.K.

Related Articles
Blog No Bear Altos Research is one of the most trusted sources of real estate market information in the United States.  Each week they track every single home for sale across the Country.  They analyze the pricing, supply, demand, and status changes for all listings.  This amount of data allows them to expertly predict changes in the market. […]
Blog RSVP Time There are four key questions that our clients have right now:1. What will values do this year and is there any chance of a housing bubble?2. When will mortgage rates drop below 6%?3. Will inflation subside this year?4. Is now a good time to buy or sell? All of these questions will be answered by our […]
Blog Bargaining Power Buyers (finally) have more bargaining power.  For many, many months sellers had the distinct upper-hand and commanded above-list price offers.  Bidding wars were the norm.  Buyers had virtually no negotiating power.The numbers show that the dynamic has absolutely changed.The ratio of the final sales price to the list price is now at 98.1%.From April 2020 […]